What is a Dolly Shot and How to Use One 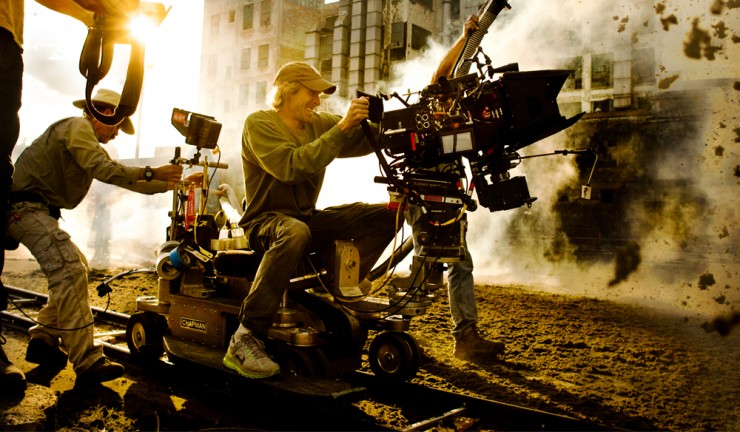 If you were asked to reveal character, story, or details about the world of your movie using only your camera and no dialogue, how would you do it?

Creating mood and feeling with only a few camera angles can be tricky. Would you use a series of wide shots? A medium shot? A series of extreme close-ups? Perhaps.

But there’s also another tool at your disposal: the dolly shot (also known as the dolly film shot or dolly camera shot).

If you find yourself asking “What is a dolly shot,” don’t worry.

We’re going to answer that question today and we’re also going to discuss when to use dolly shots, study some examples of great dolly shots in movies, and learn about twists on the dolly shot, such as the dolly tracking shot, the 360 dolly shot, and the dolly zoom shot.

But first things first…let’s define what a dolly shot is.

A dolly shot refers to a specific kind of shot where we follow a subject on an apparatus called a dolly. A dolly is a cart (or similar device) which travels along a set of tracks. The camera is mounted on the dolly and so for a dolly shot, the cart travels closer to or farther away from the objects and characters on screen, pushing the camera along with it. When you get closer, you dolly in. When you move backward (away from the subject), you dolly out.

Now that we have the technical definition of a dolly film shot, let’s discuss when to use them.

When to use a Dolly Shot

There’s no one reason or instance to use a dolly shot, but they have great utility. Dolly film shots can be used to provide insights into a character’s mind, accentuate the theme of a film, or take us on a journey through the world of the movie.

There are plenty of situations in which you can use dolly shots in films, and some of the best dolly shots have the effect of drawing the audience closer to the characters and ramping up the suspense, as a slow dolly into a scene can really build anticipation. More generally, they can also be used to follow subjects around as they move. Dolly film shots also allow the director to literally take the viewer through the world, which allows them to become more familiar with it.

For our first dolly shot example, we’re going to visit the world of Steven Spielberg, who is responsible for some truly great dolly shots.

In this brief clip from Indiana Jones and the Raiders of the Lost Ark, the camera dollies on Indiana as he approaches the golden idol. This builds suspense and creates a sense of anticipation for the audience. The following dolly in on Satipo (played by a young Alfred Molina!) does more of the same and captures his sense of awe, and the final dolly out from the idol makes clear that Indy is about to make a move for it.

This is a simple use of a dolly shot, but still highly effective.

Next up is a series of dolly film shots from the finale of Mike Mills’ 20th Century Women.

The film follows the relationships between a series of characters—some related, some not—and the push and pulls between them all. Mills uses dolly shots so frequently that 20th Century Women becomes a sort of dolly shot film, and as we say goodbye to these characters and they tell us about the rest of their lives, these dolly camera shots reflect the pushes and pulls between them; they underline how human relationships can change, evolve, and end. Despite their best efforts or intentions, human beings go in and out of each other’s lives all the time, and these characters are no different. The dolly shot effect in this sequence highlights this truth and the result is an emotionally powerful finale.

Now that we’ve looked at a couple of traditional dolly shot examples, let’s branch out and examine the dolly tracking shot.

Simply put, it combines the dolly and tracking shots into one.

Let’s start off by looking at some examples from Wes Anderson’s filmography.

Anderson’s movies feature so many great dolly shots that they’ve become dolly shot films. He uses them constantly and after watching that video, it’s clear why. Not only are they visually appealing, but they reveal the physical spaces his characters inhabit and their relations to one another. Perhaps more than any other director, he also uses dolly and tracking shots for comedic purposes. Many a joke in Anderson’s films are paid off visually via dolly tracking shots.

Anderson’s crafted some of the best dolly shots in cinematic history, and so has Stanley Kubrick:

In this infamous scene from Full Metal Jacket, the dolly tracking shot makes clear who is in charge. The camera dollies in on Sergeant Hartman as he makes his way down the line of privates and berates Private Pyle. Hartman is in command and the shot makes that very clear; it tracks him in such a way that supplements and accentuates the dialogue. Not only do we hear who’s in charge, but the way Kubrick shoots this with the dolly camera shot, we see who is in charge.

The next example comes from Joe Wright’s Hanna:

In this dolly tracking shot, we follow Erik (played by Eric Bana) through a bus station and into a parking garage. The use of the dolly and tracking shots emphasizes the scope of the sequence and shows that Erik is a man on a mission. As the scene continues, Wright also uses the dolly to make clear to both Erik and the viewer that he’s being followed. It’s more creative and visually exciting to reveal that information via the dolly tracking shot then via traditional shots and cuts.

Finally, once the fight begins in the garage, Wright begins using a 360 dolly shot which elevates the fight scene and gives it a certain energy.

360 dolly shots are exactly what they sound like: a dolly shot that goes in a full circle and covers all 360 degrees of that circle. They’re often used to provide a sense of scope and make scenes feel more cinematic and energized.

We saw how that worked in Hanna, but let’s dive into another example from The Book of Eli, which also uses the 360 dolly for a fight scene.

First, here is the raw footage:

And here’s the finished product:

As you’ll see, the Hughes Brothers cut in and out of the 360 dolly shot in the film, but it adds scope, as it shows just how many people Eli has to fend off. We wouldn’t get that in a close-up and a wide shot wouldn’t be quite as dynamic. The 360 dolly shot, however, adds a level of intensity to the scene that wouldn’t otherwise be there.

360 Dolly shots aren’t just for action movies though. Check out this 360 dolly shot example from Scorsese’s The Wolf of Wall Street:

In this sequence, we watch as the brokers in Stratton Oakmont make sales and rake in the money. The scene could easily be boring to watch; it’s just people on the phone, but Scorsese (who is responsible for many of the best dolly shots in movies) uses a series of 360 dollies to make the moment a visually stimulating and exciting one.

Our next play on the dolly shot is the dolly zoom shot.

What is a dolly zoom shot? Well, let’s have Alfred Hitchcock, the innovator of the dolly zoom, show you:

How did he do that? Well…

The dolly zoom shot, also aptly called the Vertigo effect, is a technique wherein the camera dollies forward or backward while the zoom on the lens is pulled in the opposite direction.

When executed correctly, the effect of this technique is that the background suddenly grows in size and detail and overwhelms the foreground, or vice versa, depending on which way the dolly zoom is executed.

This undermines human visual perception and results in an almost hallucinatory or frightful experience, which can be a valuable tool for a director to have in their toolbox.

It’s even more jarring when there’s a character in the frame, such as in the infamous Jaws dolly zoom shot:

This entire sequence is tense and masterful, but it’s Spielberg’s use of the dolly zoom shot on Brody’s face that captures an incredible sense of panic and horror. Roy Scheider is a wonderful actor, but there’s no doubt that the dolly zoom elevates his performance as well and makes this the iconic cinematic moment that it is.

The final twist on the dolly film shot that we’re going to explore is another one that can have a disorienting, disruptive effect, and that is the Spike Lee dolly shot.

There’s something different about these shots, right? The dolly shot effect here isn’t the same as in Indiana Jones or 20th Century Women, or even as in Jaws or Vertigo.

That’s because Lee doesn’t just utilize traditional dolly shots; instead, he puts both the camera and the actor on dollies. The result is a jarring effect where it seems as if the characters are floating rather than walking.

The Spike Lee dolly shot has been used to underline characters’ states of mind or emphasize a dramatic moment that’s just occurred or about to occur, but Lee also uses them to disrupt the audience and even the movie itself. He’s giving the audience a point of view into the story and asking us to follow the movie’s journey and believe what we’re seeing on screen. Lee is an experimenter who has some expressionist tendencies, and these dolly shots speak to that influence.

Summing Up the Dolly Shot

Are you thinking about how to utilize the dolly film shot in your own projects? If not, you should, because it’s simultaneously one of the most dynamic and practical shots there is.

The dolly film shot can help you reveal character, advance story, build mood, elevate action scenes, build tension, plant and payoff jokes, and take the viewer on a journey through your world. It is ultra-flexible and the variations on the dolly are also tools to consider using.

Whether you want to use a dolly film shot to generate some subtle camera movements to accent a scene or go all the way with the Spike Lee dolly shot, find where to incorporate dolly shots in movies you’re working on. Because once you do, you’ll immediately see the benefits, and who knows, you might even wind up like Wes Anderson and have your own dolly shot film.